March 11, 2009
The Students to Business day yesterday was a great success. Over 800 students attended this day full of sessions at Metropolis Antwerp. Apart from some technical problems, the entire day was well-organized and Microsoft managed to deliver good content.
The keynote was all about Microsoft’s newest technologies, including WPF, Silverlight and Surface. The Surface demo, however, was a bit disappointing. They could have shown more of the power of this wonderful device, instead of just porting a WPF application and adding tag functionality to it.

In the next session Kai Axford talked about how recruitment works at Microsoft. I heard some people saying he probably was exaggerating and I guess that’s kind of true.

During the lunch break, students had the opportunity to meet the Business partners in the big hall downstairs. Over there they could inform about internships and vacancies at those companies. Of course, there was free lunch provided over there as well.

After the lunch break, Katrien De Graeve did a session about WPF and Silverlight. I have only seen a part of that because I was working together with Jeroen and Kurt, the two other MSPs, on our session. The part I’ve seen of Katrien’s session was very good. Again: thumbs down for the technicians, we believed she was still trying to say something when they already started the music at the end of this session.

Next, there was a panel discussion with some guys who have been working in IT for a while. The discussion was moderated by Caroline Phillips, the Academic Lead at Microsoft for Western Europe. This discussion was more like a long interview, Caroline asked good questions, but all six panel members more or less repeated what the previous one had said and then tried to add something. Needless to say that this was a bit boring. Conclusion: good concept, but it might need some tweaking. 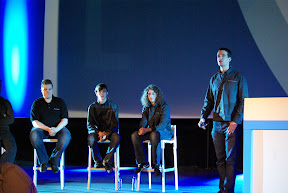 Then, it was our turn. This must have been one of the most exciting things I’ve ever done. Eight hundred students sitting in front of you, that’s a lot! I wasn’t that nervous and I think all went well, but I’m very eager to see the video of this session. It certainly was a great experience. Luckily, I wasn’t alone on stage. Jan Potemans, the mastermind of this event started our session by walking the audience trough some initiatives Microsoft has for students: DreamSpark, MSDNAA, … Then Jeroen Verhulst (MSP) talked about Student Partners, I talked about TechEd and Kurt (MSP) added something about our initiatives. Kenny Deriemaeker (second place ImagineCup 2008 Game Development) concluded our session with a brief overview of the ImagineCup.

Last, but certainly not least, Dirk Primbs explained to the students how it’s possible to create a 3D game in one hour. We have only seen the last part of this presentation, because we were backstage after our talk, but I it was a great session as well as a nice ending to an exciting day.

I have taken some pictures. Of course I don’t have any pictures of my own speech, but I’m sure that those will follow through other channels. The entire day was filmed and will be put online too.