Disclaimer: this blog post went out of control; it has become a list of events, a brain dump. Stop reading and watch the pictures as soon as you get bored.

Last week, I have attended Microsoft TechEd Europe 2009 in Berlin. I was there together with two other Belgian MSPs, Jeroen and Kurt and with Jan, the Academic Program Manager at Microsoft Belgium. It was yet another awesome experience to be there. We have met a lot of people (other MSPs, other attendees, speakers, sponsors, technology experts, …) and attended a lot of interesting sessions.

The great thing about a conference like TechEd is that you get the invaluable opportunity to meet the people behind the products. Speakers allow you to ask questions, to talk in between sessions and to participate in panel discussions.

We arrived in Berlin on Monday and had only time to attend the keynote. That keynote -to be honest- could have been better. It wasn’t a total disaster, but it looked that way because so many people left in the middle of it. It is being said that the developer general session (right before the keynote) was a lot better, but unfortunately we didn’t make it to the Messe in time for that session.

Monday night we were fortunate enough to be able to attend a historic event: the celebrations of the 20th birthday of the fall of the Berlin Wall. We arrived at the Brandenburg Gate only minutes before the fireworks started. 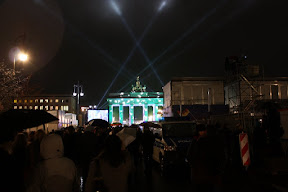 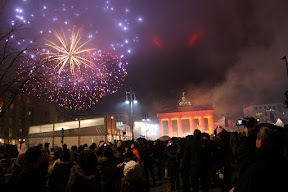 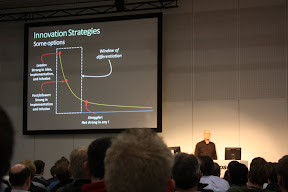 Tuesday, we started the day with a session about innovation by David Chappell, and then took some time to explore the sponsor hall. After lunch (serving a warm meal to over 7200 attendees without making them wait for too long is a big feat by itself, in my opinion) I went to a session about widgets in Windows Mobile 6.5 by Anand Iyer. After that session I expressed my disappointment with Marketplace to the speaker and he was very understanding and advised me to meet the Windows Mobile team on Thursday. Later that afternoon we had a few sessions for student partners only. Talks by Caroline Phillips, Leandro Doeyo, Holly Peterson, Jennifer Perret and Andrei Terekhov where followed by a presentation about creating games for the Zune using XNA by (the amazing, the awesome; …) Rob Miles (pictures on his blog). This MSP meeting ended with a panel discussion (with an impressive panel: David Chappell, Rob Miles, Don Syme, Giorgio Sardo and Rafal Luckawiecki) and a group photo.

Tuesday night was the opening reception, where we had some German beers and talked with Hans Verbeeck from Microsoft Belgium and the people from U2U. Hans tweeted a picture.

Wednesday was another day full of sessions. We started with the daily scrum by Stephen Forte, which was a bad idea because two of us had already seen this session in Antwerp last year. Still, an interesting topic and a good speaker! After that I went to a session about Marketplace for mobile by Daniel Bouie (Product Manager Marketplace). Unfortunately, this was a marketing talk and all problems with Marketplace where denied. It got me a bit angry and sort of nervous. But again, a big thumbs up for the speaker for taking the time to listen to our feedback after the session. Wednesday afternoon I learned some things about Silverlight 3 (by Tim Heuer) and learned how to use Windows 7 features in .Net (the new taskbar, crash recovery, …) (by Kate Gregory). Two very good sessions!

Wednesday night we joined all MSPs to nightclub Franz. We first had a HUGE burger and some beers, and then did a tour of some underground constructions. After the tour we returned to Franz for some more beer and then left to catch the last metro.

Thursday, we started with a session called “Cybercrime: Defence against the Dark Arts!” by Andy Malone. Scary, but very interesting! After the cybercrime session, Jeroen joined me to meet the Windows Mobile team. It was an interesting panel discussion. It somehow even was a bit reassuring; it could very well be that Windows Mobile and Marketplace for mobile will improve enough in the future to be able to compete again with other platforms. (note: the above is only an impression, the they didn’t comment on questions about future products). The first question for the panel was about the issue that bugs me the most: the region and language problem with Marketplace. But apparently Daniel Bouie had prepared his answer to that one, he sort of “killed” the question and moved on, but I’m glad he at least admitted that there is an issue. I’m very curious what they will change about Marketplace and how fast they will change it, people have been giving feedback about this problem for months now.

After lunch, I attended yet another Windows Mobile session. This one was all about gesture support in 6.5 (by Marcus Perryman). The thing is that I have been implementing a lot of the things he talked about during the summer. The upside about my implementation is that it works in 5.0 to 6.5 and theirs is only available as a part of 6.5. The downside is that the gesture engine and the physics engine in 6.5 are probably performing a lot better than my own implementations. I guess I will be switching my existing applications to their engines over time. 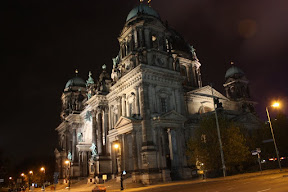 After that, I had seen enough Windows Mobile, so I joined Jeroen to a session about visual effects by Jeff Prosise, which turned out to be a rather impressive series of Silverlight demos. After that, even Jan joined the two of us to “Windows Embedded: ‘Demos Only’” by Olivier Bloch. Some of the demos failed, but still an interesting session. After that, we went to the sponsor hall for the community drinks (yep, more beer…). We had some sushi, talked a bit, where baffled by a magician and then I dragged Jeroen and Kurt to Louisa, a Swedish MSP who was doing video interviews with all MSPs (I had already done mine). Then, we went for a walk in Berlin to celebrate our last night in this beautiful city. 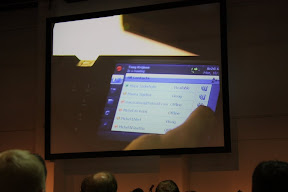 Friday was our last day in Berlin. We attended a chaotic, but still interesting session “Living Our Connected Lives” by those two funny Dutchmen Tony Krijnen and Daniel van Soest. I don’t blame them for the chaos; someone broke in to their hotel room the night before their session and stole some of the devices they were planning to show off. They showed (amongst other things) a desktop phone with a touch screen that allows you to see whether to person you’re about to call is available. They also “read” a few emails that people in the audience where asked to send them using their mobile phones (in French and in German) by calling the Exchange 2010 server. They demoed how you can navigate your emails with voice control and how a multilingual electronic voice can read your emails. They even showed how to send an email to all attendees of a meeting by literally telling the server “I’ll be late … 20 minutes”.

After that we had lunch and leaved to the airport, that was it, TechEd 2009. Yet another awesome experience.

Note: Jeroen and I will be doing a presentation about TechEd at Ghent University on Wednesday 18 november. More info on http://zeus.ugent.be/2009/11/15/teched-2009/